As millions of children walked through an uncountable number of neighborhoods last night, I couldn’t help but to think about Kum-Kum Bhavnani‘s new documentary Nothing Like Chocolate. As I watched the children, like my own two sons, who raced as fast as they could from house to house, acquiring more and more chocolatey treats, I thought back to one of the most startling statistics I’ve ever heard that was illuminated at the beginning of this film – child slave labor is used in the production of 70% of the world’s chocolate supply. So, every “fun size” Snickers my sons were able to treat out of one of my neighbors was indeed produced on the backs of children who were sold or forced to work in the cocoa fields of places like the Ivory Coast, Guinea-Bissau or Venezuela. Some 20,000 children are trafficked in this industry, beaten and intimidated into staying on in the fields and forests so that kids like mine can enjoy that little treat on Halloween. It’s beyond sad.

And that leads us to the focus of the film – Mott Green and his Grenada Chocolate Company. Narrated by activist/actress Susan Sarandon, Nothing Like Chocolate tells us the tale of Mott and how the Grenada Chocolate Company came to be. Mott and his partners lived in Grenada, which has some of the highest regarded cacao in the world.  Having been socially and politically active in their youths and knowing how the worldwide system of chocolate manufacturing is, they wanted to break the mold. They aimed to create a co-operative system with the farmers in Grenada to produce organic chocolate (from “Tree to Bar”) that made sure no slave labor was used and that the locals and farmers benefited as much as possible. And that’s precisely what they did. Using solar energy, older machines brought over from the US as well as organic principles, the Grenada Chocolate Company got off the ground and has been doing very well.

This is more than a tale of the men who started the company though. Bhavnani also tells the tale of Nelice, a mother of six and a local cocoa farmer who is not in the co-operative with Mott Green. The film does a really great job showing us who she is and what she represents – she having basically the same principles as Green aside from his non-belief in God (which is a really touching and funny scene). We grow to care for her and her beautiful children as she represents the human aspect of what this alternative means of production can do for people. When Mott approaches her to ask if she wants to be part of the co-operative, she says that the government pays her $1.30/lb. for her cocoa, to which Mott says he pays $2.00/lb, a substantial increase. Ultimately, she agrees and the process becomes a little stronger for all. 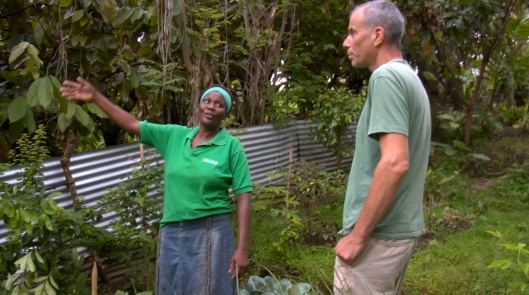 Nelice and Mott look over her land to make sure it fits the co-op’s requirements.

Sprinkled throughout the film, experts such as Michael Pollan,writer of The Botany of Desire and featured heavily in the documentary Food Inc., and Dr. Vandana Shiva, environmental activist, all praising the methods which Green employs. Pollan likens the artisanal efforts of Green and his company to that of strengthening human rights and Dr. Shiva states that his methods are returning the sacredness to cocoa. Those are two ringing endorsements.

This film also takes on the bureaucracy of getting the Fair Trade designation, with Green taking the lead. This part is quite informative as I had never known what it took to be labeled “fair trade,” which helps producers in developing countries to make better trading conditions and promote sustainability. He points out getting Fair Trade designation works more for the exporters rather than the farmers, which defeats the purpose of what he’s working for. Dr. Shiva agrees with Green on this point, stating that what is needed is to replace the Fair Trade certification market with an intimacy market, i.e. the co-operative set-up that Green employs. Green’s efforts in this arena even extend to “fair transport” – using a sustainable, non-polluting means of transporting his wares from Grenada elsewhere, like using sailboats. 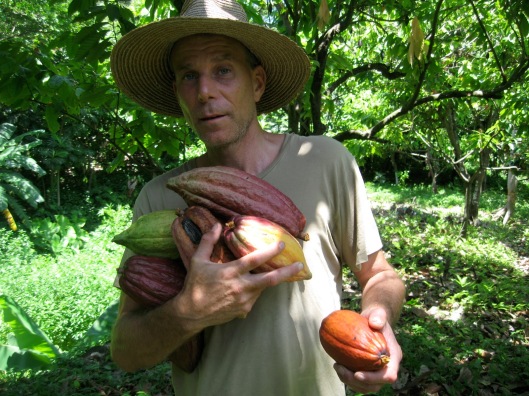 Mott Green in his element.

This film is ultimately about hope in a world where profits drive motives, where the welfare of people is secondary to the cash they help create. Mott Green‘s vision of what the Grenada Chocolate Company can be not only to Grenada and its inhabitants but for other operations around the world is honorable and selfless. His motto is: “We’re doing this for idealistic reasons: we are activists and our goal is to create a true worker-owned co-operative.” I truly hope that his business plan is taken up by the many and replaces the old broken system. No one, least of all children, should be subjected to slavery so that others can make money. It’s heartbreaking to think of.

This was my favorite film that I saw at the festival and one that I am thankful that I saw. Keep an eye out for it should it make a theatrical run. Hopefully it will find its way at least to DVD or streaming.