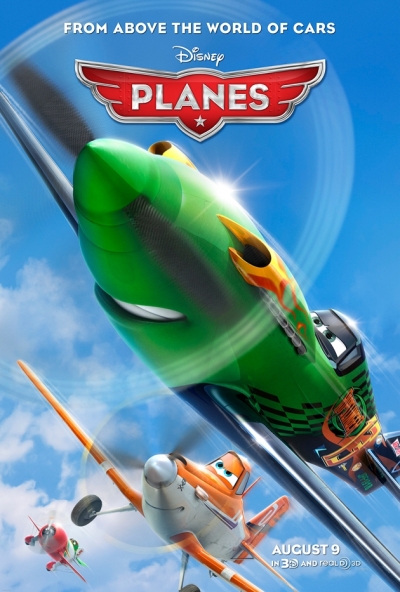 So, I took my two sons to see Planes in 3D today, which was their first 3D experience in the theater. They really enjoyed that aspect, but I suspect they just liked wearing the cool glasses. Or not. So, I decided that I would ask them (as I had when we saw the lowly Smurfs 2 last week) to give me some of their thoughts. So, after begging for over an hour, this is what I dragged out of them:

My favorite character was Dusty. I just liked his colors and I thought, well, Ripslinger was cool. I also liked El Chupacabra. There was a scary part when, uh, Skipper and his squadron were going to fight the bad guys (my words here – this was a flashback sequence to World War II) and it was pretty good. I loved the ending because Dusty had a cool new uniform thing from the Jolly Wrenches and Skipper was really old but he got to fly with him. It was, like uh, zero percent bad and one hundred percent good. Okay, that’s it.car

My favorite was Bulldog (my words – he was a British plane). I liked the part when Dusty Crophopper saved him. I didn’t like Ripslinger or Zed and Ned because they were trying to beat up Dusty Crophopper. I liked it when Skipper helped Dusty from getting crashed by the bad guys. I liked it one thousand percent. I liked it better than the Cars movies.

I’m excited to have my kids contributing to this. Hopefully this won’t be the only time they do so. I am interested in their perception of the things that they watch. Now, for my take on the film:

I, on the other hand, wasn’t so high on the film. It isn’t hard to notice on all of the marketing materials that this film was made by the same people who made Cars. In looking at the narrative, it is nearly the same film, with the same characters. Dusty (voiced by the worst comic alive in Dane Cook) is merely a stand-in for the much more charismatic Lightning McQueen. The Tow Mater role is aptly filled by Chug, a refueling truck, who is voiced by the goofy Brad Garrett. Once again, the female characters in a Disney film are laughable, merely window dressing and something for the boys to gawk at, with the exception of Dottie (voiced by Teri Hatcher) who is a mechanic/tomboy and just one of the guys.  Sigh. That Disney couldn’t secure remotely top tier talent to voice this film should clue people in to its quality. While I know that films like Up and such didn’t exactly have A-listers, the content of those films was a little more hearty than a basic remake of another film only different by changing the type of transportation vehicle depicted. I don’t doubt that we will see a Trains or Boats movie in the future, although this film pretty much tanked at the box office this weekend, so there might be hope. However, there is already a sequel lined up (surprise, surprise) called Planes: Fire & Rescue.

This was our first 3D experience and the boys really loved it. I, however, did not care for the $11 ticket price that included the visual trickery. Likely the last time I will do 3D unless the kids fork over their own money to cover the difference.

Here is the trailer:

Here’s her AWESOME take on the newest James Bond film:

“It was a big waste of time, and it had no point, and i didn’t get anything about it, and i think we should have not even watched a movie, and we could have just went somewhere to eat. All it was, was a guy kicking people in the nostrils and shooting. It didn’t make any sense because he died at the beginning and he came back alive. And then this girl came and she did the same thing. It was a big waste of time because you sat there and watched people kick each other in the face. My grandpa yelled out “indeed” in the middle of it and my uncle was blocking [my brother’s] drink.”

CLASSIC. Hopefully, I can get her to do more of these when she sees movies. This is the best thing I’ve read all year. Unfortunately, I have yet to see Skyfall to corroborate. I guess I’ll have to do that soon…