It’s inconceivable (get what I did there?) to think that on a blustery Indiana spring morning that I would have the pleasure of speaking with Wallace Shawn, the Wallace Shawn of infinite stage fame and hero to many for his roles in films like The Princess Bride, the Toy Story trilogy, Vegas Vacation, My Dinner with Andre and Star Trek: Deep Space Nine, The L Word and Clueless on the small screen. And a pleasure it was. And what were we speaking about, you ask? That would be Dan Fogler and Michael Canzoniero‘s Don Peyote. So when Wally (as he’s more affectionately known) called me from NYC, we had a quick chat about the film and a few other things as well. 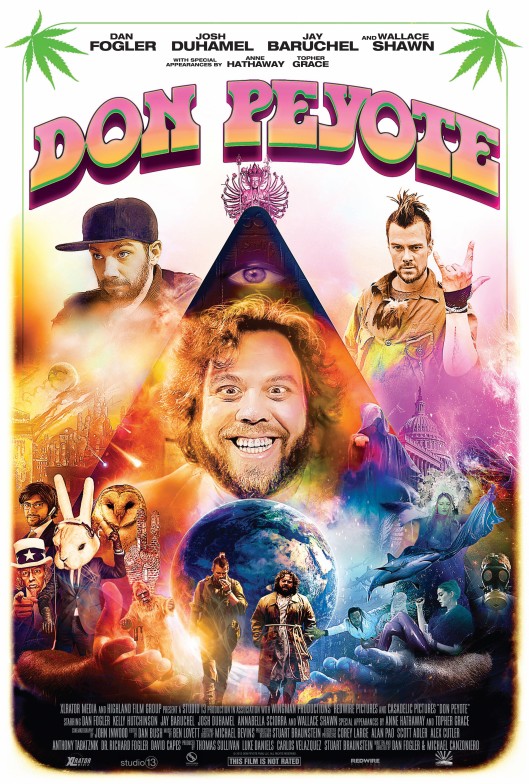 First off, let me describe the film so you have a frame of reference. Warren (played by Fogler) is a graphic novel writer who is about to be married. He has some trepidation about the way his life is going and how to proceed. When he gets knocked down by an End-of-the-Worlder (you know, the guys who carries signs around sandwich boards stating that the world is going to end?), a drip of his sweat falls onto Warren and he is instantly changed, as if he had ingested 3,000 tabs of acids. His mind scrambles and he dives deeper and deeper into his own consciousness trying to figure out everything means. He begins to make a documentary about the end of he world, employing real-life conspiracy theorists and apocalypse believers to speak about their beliefs. This pushes him further into his own mind and makes him reconsider everything he has ever believed. Needless to say he passes through some pretty heavy shit and in the process alienates his fiancee (Kelly Hutchinson), ends up in a mental institution and in the end, assumes the role of the Apocalypse Predictor holding the sign warning everyone of the End Times. Along the way, he meets many crazy characters (usually played in surprise cameos by very recognizable faces like Anne Hathaway, Jay Baruchel, Abel Ferrara, Topher Grace, Josh Duhamel and of course, Wallace Shawn). The descent into the mind of Warren is scary at times, inexplicable in others, and downright confusing most of the time. But that’s neither here nor there.

So back to Wally…

I was curious how he was cast in the role of the inattentive psychiatrist to listens to Warren detail his predicament:

I have no idea. I suppose those guys [Fogler and Canzoniero] had watched too much television. I wonder who that old bald guy is and if he’d be good (laughs).  I was available and I’ve played quite a few psychiatrists in my day, so it made sense. In fact, when I was thirteen I wanted to be a psychiatrist. Why? It’s easy to sit in a chair and listen to people. It’s an enjoyable way to spend time.

I thought the writers came up with some really interesting characters that were brought in and then whisked away. I couldn’t really tell if it was all a joke or if maybe [Warren] was actually right, that the world was coming to an end.

This of course led to me to ask about the ideas of multiple conspiracy theorists that appear in the film and occurrences like Superstorm Sandy that hit New York in November of 2012.

Extinction of human beings on planet earth is a very real possibility. If everything goes on as it is now, there might be some superstitious or preposterous ways of thinking, but I think what they’re sensing is something that is absolutely undeniable.

It was hard to speak with Wally and not ask him what his favorite film role he’s had is. Of course, I fully expected him to say Vizzini from The Princess Bride as it is his most memorable role, although I’m sure there are many that would argue otherwise. He did not say this, however.

The film I’ve just finished with Jonathan Demme and Andre Gregory, The Master Builder based on the Ibsen play. It’s a character (Halvard Solness) that I’ve worked for 30 years to perfect.

And we finished with a quick convo about how he and Demme are supposed to be bringing that very film to the Indiana University Cinema where I live at some point in the future.

I would certainly love to come there. I have family in Illinois and have a fondness for the midwest.

And with that, Mr. Shawn was whisked away to another interview and I bid him adieu. A pleasant conversation and one that I’m terribly excited to have had.

The next day, I was fortunate enough to get one of the brains behind this film, writer/director/star Dan Fogler, to chat with me about the evolution of this project and  his intentions when he set out to make it. Fogler is more known for his brand of Chris Farley-esque physical comedy in films like Fanboys, Take Me Home Tonight and Balls of Fury. He steps outside of that zone and inserts himself into the self-penned and directed role of Warren.

My first question was what was it like to work on both sides of the camera?

I had done a horror/slasher/comedy film called Hysterical Psycho (on VOD now) and I caught the bug. I envisioned a scene in [Don Peyote] and pitched it to Christopher Walken who I wanted to take the role. He was busy, though. It kind of grew from there. It was an organic process. I wanted to employ the same philosophy I used on Hysterical Psycho – working with my friends, not worrying about budget, ask a lot of favors and just shooting it. If you let people play, you can find something in the editing. You can create a whole new film in the editing room and that’s what we did here.

After mentioning that I had just seen Roger Corman in person when he showed his film The Trip, I asked him if there were any films or directors that influenced Don Peyote:

Movies of 60s and 70s were influences. Happy and peace type shit. Easy Rider and [John] Cassavetes were big influences. Run and gun, point the camera and just film what happens. Being There with Peter Sellers, genius idiot savant that changed the world is another film that was an influence. Another was Dr. Strangelove – films with a message at the core. [Stanley] Kubrick, Annie Hall (breaking the fourth wall), Alice in Wonderland…down the rabbit hole – all of those. I wanted to do an homage to Wizard of Oz with the first part of the movie then change it into a [Terry] Gilliam film.

Since Warren is kind of a slacker and is prone to getting stoned all the time using an apple as his delivery mechanism, I assume there was symbolism there, yes?

The apple is a multi-layered metaphor – his fiancée doesn’t want him to smoke, but he can get rid of the evidence quickly if needed. Also, I look  at the apple of as the apple of knowledge, information taken in through a new way. Warren is searching (like in high school and college) for new information.

After seeing the film, I looked up a few of the people appeared in it as “experts” on end of times scenarios/conspiracies and such. Were they apprehensive about appearing in the film?

Some experts had trepidation – some people wanted to be blurred, some didn’t want their real names used. Some loved the idea of being in a movie. The majority were excited to be a part of the film.

And to finish up, I asked him about any future directing projects he has on the horizon:

Hysterical Psycho/Moon Lake – like Twilight Zone on THC. Trying to build a TV show out of that. A few other ideas kicking around as well.

All said, Don Peyote is a big change in direction from prior films Dan Fogler has been involved with. There is still sophomoric humor, yes, but at a different level. And by different I don’t necessarily mean good. Warren’s best friend in the movie, unfortunately named Balance (played by Yang Miller), ironically fails to provide what his namesake is for his friend, absent at times when he is needed and when he is present, he is not needed. This lack of equilibrium is what tips Warren further and further into the abyss, never to return. As stated above, there are various asides and dips into and out of consciousness, but they are so haphazardly stitched together that the film lacks any kind of cohesive shift from one to the other which weighs down the pacing to the detriment of the film as a whole. While it is nice to see actors like Fogler step out of the arena he’s known for, I’m not sure this film works. He was extremely personable in the interview and I think he has found a niche in film. I think this one might have been too big a stretch, however. Ultimately, you need to decide for yourselves if Don Peyote is for you. Maybe you’ll find something in it that I didn’t. That’s why we go to the movies, I suppose.