A somewhat interesting look at photographer/adman Bert Stern, who is most famous for his pictures of Marilyn Monroe called The Last Sitting as well as revolutionizing the advertising business, by his former paramour Shannah Laumeister who seems to be too close to her subject to give us a true, in-depth portrait of the man and his vices (women, amphetamines among others) that caused him to dive from the heights of fame to relative obscurity before a subsequent revival (he did shoot those shitty Lindsay Lohan pictures in the same vein as Monroe‘s Last Sitting…gross).

Stern died earlier this year at the age of 83.

I will admit that I have been an unabashed fan of Bret Easton Ellis since I read American Psycho when I was in college a couple of years after it was released. While brutal, I thought it was an interesting satire/indictment of the yuppie/Wall St. culture. He’s always been a literary guilty pleasure of mine and I devoured his novels and short scenario compilations as they were released. Hell, even his endorsement on novels was enough to get me read them. If it weren’t for him calling Chuck Palahniuk “the Don DeLillo of our generation,” I would never have read Survivor, which in turn led me to Fight Club, well before that film was ever produced. For that, I thank him. So when I heard he had written a trashy script that was being directed by Paul Schrader (screenwriter of Taxi Driver and Raging Bull, as well as director of Blue Collar and Mishima: A Life in Four Chapters), I was intrigued.

But when Lindsay Lohan, everyone’s favorite drugged out young actress cautionary tale, and pornstar James Deen were cast as the leads, the wheels fell off the fucking bus. This film was made using Kickstarter, so it’s budget was a miniscule $250,000. It’s obvious that top-tier talent wasn’t going to flock to this project, but you might think Schrader could pull better talent than this. So be it. With Lohan in tow, everyone knew the production would be a clusterfuck since she isn’t exactly known for her professional behavior, right? But that’s neither here nor there. There were obvious hiccups with the production caused by her, but this ain’t TMZ, so I won’t elaborate on them. Google that shit of you’re interested. Onto the film…

The basic storyline is this: Christian (Deen) is a movie producer and does so to keep his mean old daddy off his back so he can keep his trust fund flowing. No job, no cash. Tara (Lohan) is his girlfriend, but they have a special relationship – they often bring other people into the bedroom with them, sometimes to participate, sometimes to watch. Tara has helped with the casting of a new film Christian is producing, but has backed off while production ramps up and is set to start. Why you ask? Because her ex-boyfriend, Ryan (Nolan Funk) has been cast as the male lead. They have rekindled their former romance behind the backs of Christian and his assistant Gina (Amanda Brooks), who is Ryan’s current girlfriend and payer of bills. Christian is the jealous type and with Tara stepping out behind his back with an ex-flame is a bomb about to explode and it is the driver for the rest of the film.

A contemplative Christian, plotting his next move.

Christian does everything he can to destroy Ryan professionally and personally for this affront to him. Strangely, he leaves Tara alone for the most part, a rare moment of an Ellis male character showing restraint with regards to a female. However, his fuck buddy and friend to Ryan, Cynthia (Tenille Houston), doesn’t fare as well when Christian channels his inner-Patrick Bateman and kills her. As the film progresses, Ryan’s world continues to implode – he loses Gina after he tells her of his fling with Tara consequently losing the part in the movie, his one chance to start making some money of which he has none, Christian wields the murder of Cynthia over his head and can pin it on him at any time, and he loses Tara as well as she acts as Christian’s alibi in exchange for him letting her out of their relationship.

That’s the really the long and short of it. And I’m going to be frank here – this movie sucked. The biggest problem I have with the film as a whole is the script. It is derivative of everything Ellis has written before and reeks of the published amalgam of shitty stories he put into The Informers when he had writer’s block when writing Glamorama (also when he was last relevant, at least in my eyes) to satisfy his publishing contract. Christian’s Patrick Bateman streak is Bateman Light and it seems that Ellis can’t seem to write something without murder. Sexual deviance and dysfunction are also Ellis‘ bread and butter and feature largely in all of his of his published works and are flaunted wildly in this film. I guess that’s to be expected when one of the leads is a pornstar. The dialogue didn’t have the same snappiness that his novels have brought. Ellis continues to mine the same old chestnuts for his material and these circles might have been relevant or unexposed in the past, but we’ve seen it many times now, Bret. Mine some new, more fertile ground because it’s getting old.

Bret Easton Ellis: once l’enfant terrible of the publishing world.

Let’s not kid ourselves – the actors didn’t do this movie any favors either. You get what you might expect from James Deen. The only time he showed any kind of range was when he was yelling at and smacking around Lohan for looking for her phone near the end of the film. Watch: 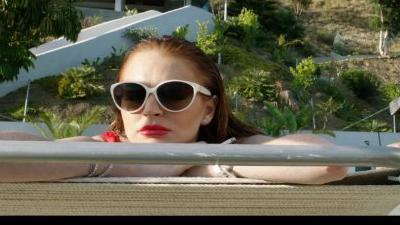 Frankly, I’ve never understood why anyone thought Lindsay Lohan was worthy of filming. She was in bad remakes of old 60s and 70s family fare (The Parent Trap, Freaky Friday and Herbie: Fully Loaded) and Mean Girls, the film she is most lauded for and where she wasn’t even the most talented actress in the film – Lizzy Caplan outshined her and we all know it. Then she swirled down the drain of cocaine addiction and narcissism. So what does she bring to the table that is even worthy of mention besides her ridiculous ass personal exploits and the ability to be the butt of any joke you can think of? Nothing. I’ve never found her engaging or remotely interesting to watch in any way. And that she is fueled by her fucked up parents, she (and they) expect her to be treated like royalty. Sigh. Stick to the cocaine, Linds. Something tells me you’re better at that than your so-called “craft.”

Most of the other aspects of the film were equally as bad. Even the Lynchian/Badalamentian score was overwrought and brought a false sense of dread to the film that wasn’t warranted by any of the actions depicted. The only part I liked was the cinematography, especially the shots of the rundown old filmhouses and cineplexes at the beginning of the film and jammed into the body, delineating one day from the next. I saw Schrader speak when he came to town to show the restored cut of Taxi Driver and he insisted that the old ways of filmmaking and exhibition are long gone and I thought that these shots echoed that sentiment. And that about sums it all up.

The Bling Ring is a fair film, shot gorgeously (Harris Savides RIP) and an apt and sad assessment of our material and celebrity-crazed youth culture; however, the shift from Marc (Israel Broussard) and Rebecca’s (Katie Chang) pov to focus more heavily on Nicki’s (Emma Watson) later in the film was baffling and didn’t seem to serve the story nearly as well as the first two acts.

Here’s the American Greed episode about the real people involved in the events depicted in this film:

First klepto-cokehead-trash heap Lindsay Lohan plays Liz Taylor, now horse-faced Miley Cyrus will play Bonnie Parker in a tv miniseries? Pardon me while I vomit. Twice. Naaaaay – three times (do you like that horse pun?).  Already the purveyors of absolute shit TV, Lifetime really has outdone themselves. Hilary Duff was already clowned by Faye Dunaway for reprising her role in a remake of Bonnie & Clyde. Luckily, production of that film was halted.I can’t wait to hear Faye’s response to this one.

Cyrus couldn’t hold Dunaway’s sweaty undergarments in that role. No one could. Leave well enough alone. But this is Hollywood. Why shouldn’t someone want to remake a film that literally changed the landscape for American filmmaking and while doing so, cast a shitty teen TV personality/”pop star” in the iconic lead role? Makes sense to me. Almost as much as casting a crackhead to play the hottest woman to ever grace the big screen.