After watching Beautiful Girls again this past week, I remembered how much I loved it when the group of high school buddies sing “Sweet Caroline” and it got me thinking about other musical interludes that I have really enjoyed. There aren’t too many, and some involve movies with Julia Roberts in them, so those are automatically disqualified despite, perhaps, their merits as good scenes in otherwise shitty movies. Guilty by association, I guess. I stayed away from actual musical films such as Grease and the like, well…because that‘s the purpose of a musical – to have musical numbers, right?

Anyway, here’s a list of great film musical interludes with two for good measure from television.

Here we go in no particular order…

At a time when fictional band Stillwater is on the rocks and badass guitar player Russell Hammond (Billy Crudup) is thinking of leaving, this scene becomes the band-aid that keeps everyone together. After a rough night of fighting with the band and then partying with fans in Topeka, Kansas, Russell is ushered back onto the bus to finish the tour. The rest of the band is upset, the groupies are upset, the journalist (Patrick Fugit) is upset. In a movie that relies so heavily on music, what is the only thing that can make it better? Music, of course. And what better song to lift the spirits than Elton John‘s “Tiny Dancer.” Sing it, boys and girls.

Anyone who has seen this movie knows it’s one of the most depressing films out there. Just when you think it can’t sink you any lower, this scene pops up, granting some relief to the misery you’ve experienced up to this point. With each character contributing to the scene, they also receive a tiny ray of hope in their lives as it is here they all realize that if they don’t change their ways, their lives are only going to get shittier. They all really do need to wise up. For some it’s already too late. This is one of the most powerful uses of song in any film I’ve ever seen. The softness of this song by Aimee Mann is in direct contrast with the opening of the film when her cover of Three Dog Night’s “One” plays so loudly over the opening credit sequence, it competes with what the characters are saying, making it hard to understand what they are saying/doing, like the swirl of everyday life interfering with with what they are doing. This scene grants each character clarity and time to reflect on their situation. God damn. This is why Paul Thomas Anderson is the best filmmaker out there.

Friends will land you in some pretty shitty situations and that is the case to what leads into this scene. Seth (Jonah Hill) leads Evan (Michael Cera) to a party where they hope to score some alcohol with which to capture the admiration (and lower the inhibitions) of two girls whom they wish to sex at another party. All goes awry when Seth dances with the wrong girl and Evan is stuck in a room full of cokeheads who mistake him for a friend’s little brother. The only way out of the situation…is to sing. That he chooses to sing The Guess Who’s “These Eyes” is quite hysterical since it is a love anthem. Not exactly something you would expect one man to sing to a room full of testosterone-brimming meatheads, huh? That’s what makes it funny and memorable.

Ahhh….young love. We all remember the first time we were so lucky to get together with the one boy or girl we had been waiting forever to do so, yes? We all felt that same as Tom (Joseph Gordon-Levitt) afterwards, yes? I know I’ve danced a step or two myself in this same fashion, imagined marching bands heralding my approach, bluebirds on my shoulder. And who could blame him, right? Summer (Zooey Deschanel) is attractive and cool and worthy of making his dreams come true.  So fair play to you, Tom. Get yours and get down. “You Make My Dreams” by Hall & Oates is the perfect accompaniment since it is the epitome of cheesy, poppy 80s goodness and that’s what this scene harkens back to – a time when you could get away with shit like this in a movie. Should this work here? Maybe, maybe not, but it does. And well. 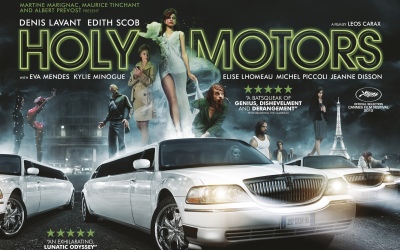 For those of you who have seen Holy Motors, you know just how fucked up it is. This is a film that is not tread lightly upon as those who are weak of heart shall not come out alive. Amidst the craziness that occurs in this film, 9 different scenarios to be exact, this scene buffers the two halves of the movie and is aptly labeled as the entracte, or the interval between two acts of a theatrical performance. This accordian-laden cover of R.L. Burnside‘s “Let My Baby Ride” is the perfect palette cleanser for the second half of the film, and without it, the insanity of the film possibly overwhelms itself, its series of strange situations becoming too much to handle. An absolute master stroke by director Leos Carax. And the song is a fucking jam to boot.

Easily my favorite TV show of all-time, The Office (the original) from the UK has provided more laughs and cringe-worthy events than anything I’ve ever seen on the small screen. David Brent (Ricky Gervais, pure genius) is the manager from hell, and just when it was thought that the training day couldn’t get any worse…he breaks out his guitar. After treating his colleagues with a medley of songs from his old bands, Foregone Conclusion, he breaks into his masterwork, “Freelove Freeway.” The song is 100% Brent and the reactions from his toadie Gareth Keenan (MacKenzie Crook) and office contrarian Tim Canterbury (Martin Freeman) are as priceless as the song is awful. That they join in adding their own parts is the best. Great moment from a great show.

Surprisingly, Skins, also from the UK, gives us our last entry. I had heard about this show a few years back and gave it a spin just for grins and giggles and was completely surprised by how good it was…well, at least the first two seasons. This clip is the culmination of the entire first season where so many of the characters have been shit on – Sid (Mike Bailey) has lost Cassie (Hannah Murray), Tony (Nicholas Hoult) gets run over by a van just as he’s finally patching things up with Michelle (April Pearson), Chris (Joe Dempsie) has just had his heart broken by the teacher Angie (Siwan Morris). So Cat Stevens‘ “Wild World”  couldn’t be placed any better as the kids are ushered into the adult world where shit doesn’t always go your way and you don’t always get a trophy for showing up. Some adjust better than others. A very pivotal moment in the show and one that is earned.

So that’s that. I’m sure there are more that may well fit onto a list such as this, but these are the few that have stood out to me. Feel free to share any that you think are deserving.